A few months back, I stumbled upon a review of Justin Hocking’s The Great Floodgates of the Wonder World  in The New York Times Book Review. It’s a memoir by a Colorado skater and writer who moved to New York City and I guess wound up discovering himself by surfing in Rockaway. That, on the heels of Rockaway, Tara Ison’s 2013 novel about an artist who retreats to the peninsula in 2001 in search of inspiration for her work.** 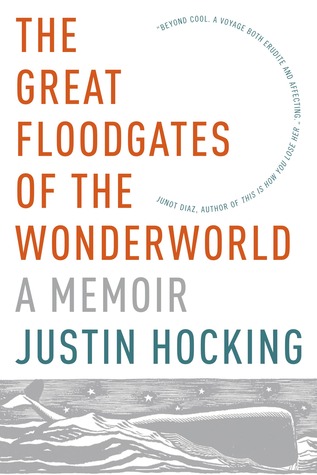 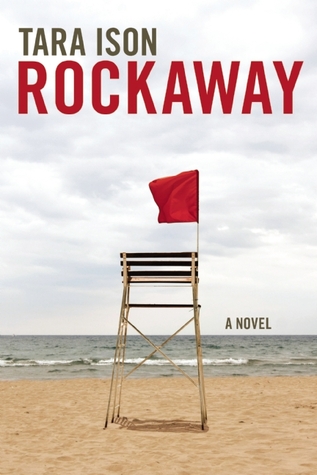 It is striking that both of these writers cast Rockaway as a destination, a place where one chooses to go, indeed, chooses to be, to stay. For most of my life, this was a place you talked about escaping from, but never really did. Yet here it is, presented as an artist’s escape, a young hipster’s salvation. I suppose that shift is a microcosm of the changes that have affected all of New York City over the past few decades, but somehow, Rockaway’s geographic isolation seemed to both separate us from the lowest lows of the 1970s and 80s while at the same time magnifying them. I grew up watching all my friends’ famillies leave Rockaway to head toward greener pastures “out on the Island,” believing that a quiet suburban life would protect their children from the drugs and violence and blight that was creeping over Rockaway and the rest of the city at the time. I wonder how that worked out.

Anyway, all this literary chatter about escaping “to Rockaway” reminded me of what I suppose must be the definitive Rockaway novel: Jill Eisensadt’s 1987 From Rockaway. 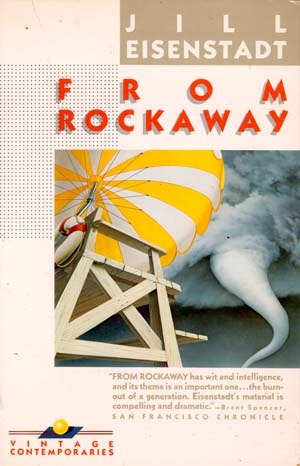 Eisenstadt was affiliated with what was at the time hyped as the “literary brat pack,” a group of young writers out of Bennington College in the late 1980s (more celebrated–and prolific–members of that posse include Donna Tartt, Tama Janowitz, and Brett Easton Ellis). The novel  got a fair bit of buzz when it was published, with mentions in The New York Times, Glamour, and elsewhere.  I had read it back when it came out, and while I was fuzzy on the details, I remember thinking it captured a lot of what I felt about this place at that time, perhaps mainly due to the fact that  I, like the book’s four protagonists, had just graduated from high school. I wasn’t social enough to know if the details were right, but I do remember really connecting to that  dead-end-on the-edge-of-the-big-city vibe:  yes, people want to escape this place, but as the old  timers say, once you’ve got that sand in your shoes, it’s very hard to do. I decided to revisit From Rockaway, and see how it well it holds up.

First, the back cover copy, from the publisher:

“In Jill Eisenstadt’s savvy, heartfelt novel we enter the world of working-class kids in Rockaway, New York, a beach community where beer cans and cigarette butts stud the sand instead of seashells. Peg, Alex, Chowderhead, and Timmy play, drink, and dream together. Their circle breaks apart when Alex gets a scholarship to a “rich kids’ school” in New England. Soon the rituals described in her anthropology text seem less bizarre than the games in the dorms around her. It is back in Rockaway, reunited with the old gang for the summer, that the explosive depth of feeling in kids with no options beyond the local deli and the lifeguard stands shows Alex what it means to face adulthood.”

One sign of changing times, I guess, is that my ten-year-old was deeply offended by the description of our beaches (“This book LIES!!!”). But I remember avoiding the filthy beaches when I was her age. I had to have a little heart-to-heart with her (“Sweetie, let me tell you about the 1980s….”).

I’m about midway through now, and the one thing that’s striking me about it is how much it feels like a period piece: the local and pop culture reference are so of that moment, of that time and place, that they almost feel like nostalgic renderings written by a sentimental author trying to hang on to memories from her youth. Little details (the slogan on a Clearasil container, references to the Slice of Life pizzeria, the rumors that Frank Sinatra had bought up all the empty lots in anticipation of legalized gambling) had me spinning back to 1986 like it was yesterday. Moreover, that feeling that you’d never get out of Rockaway (remember when we called it Rotaway?) is tangible. At one point, a character refers to a map of New York:

“Rockaway, just a tiny strip that hangs off Queens as if it isn’t sure whether it wants to break away and become an island of its own or hang on tighter, desperate not to be abandoned.”

Yup. That about sums it up.

It’s definitely a local story, and it’s a work of fiction: There’s truth in the spirit and in many of the details, but of course the author has exercised some artistic license as well.  I was tickled by some of the copyediting errors that made it through (you have to be from here to know that it’s “St. Francis on Beach 129th Street” and not “St. Francis on the Beach, 129th Street”).  I can’t speak to the lifeguard culture that Eisenstadt describes in the book, other than to venture a guess that the “Death Keg” party she describes might be a literary invention: To my recollection drownings while guards are actually on duty seem too rare to have developed a real ritual around them (and in any event, I just can’t imagine local Irish boys getting quite so theatrical).

Anyway, there’s much to be said about From Rockaway, and how it reflects a Rockaway that once was and and is no more, but at the same time reflects the Rockaway that will always be. I’d love to hear other people’s thoughts on it, both dyed-in-the-wool locals and new arrivals. It’s out of print, but I was able to score a used copy on Amazon for a couple of dollars (Note to Random House: Rockaway is having its moment. You might want to reprint).

**I confess I haven’t read either of these novels yet. Too many books, too little time. If anyone has, I’d love to hear your thoughts.

Back in the 1990s, the term “slacker” was applied broadly to my generation, and frankly I’m comfortable with it. I am Gen X. I work for myself, at home, usually in jeans, and I set my own hours. I do not check emails at the dinner table.  I do not have sweeping aspirations for my children, beyond teaching them to make good decisions and to be good people. In general, I do not “Lean In.” But I am, at the most basic level, happy and content. Slacker? I’m fine with that.

“Narrowback” is a term that refers to the first-generation American children of Irish immigrants. I’m one of them.  My father was a tough little Kerryman who came to New York in the 1950s in search of his American dream. My mother was the child of a Kerryman on one side, and the grandchild of a Kerryman (and a Kerrywoman) on the other. All these immigrants came to this country and worked their asses off, mostly in construction trades. And as a rule, their American children don’t have to work as hard. We go to college, standing on the broad shoulders of our parents and grandparents, and graduate into white collar jobs. We don’t build skyscrapers or dig tunnels. We have softs hands. We have narrow backs.

I like to remind myself, when I’m feeling overwhelmed with work or kids or All The Things, that I have a pretty cush little life. Thanks, Kerrymen.