When I first posted about the Momentum Optimization Project, I was expecting just a few friends and family members to read it. But it must have struck a chord: As of today, it’s been viewed more than 100,000 times (although part of me suspects it’s my mom, clicking over and over again just to feed my ego). The traffic kind of freaked me out, to be honest–I’m an editor, not a writer, by trade, and I’m not really used to having people whom I don’t know read, comment, even ask me for advice based on something I’ve written. I should probably make it clear that I’m not an expert on anything, more of a curious questioner. And as far as getting my kids to keep things really need and orderly? It’s kind of hilarious that anyone would look to me for advice, because: I am a disaster. Seriously. I need one of these just to find my keys at any given moment.

Anyway, 100,000 views are bound to yield a few criticisms.  A few readers inferred that my insistence on the kids reading “real text (not comics)” meant that I don’t want them reading comics at all, or that I don’t think comics are valuable. Others thought that by limiting screen time and insisting on “creative time,” I was implying that computers are not in fact tools that can be used creatively, or that I think gaming is stupid. All of which is kind of hysterical. Seriously, media–tv, books (including comics and graphic novels), movies, music, online gaming and computers–makes up a huge chunk of our family budget, in terms of time and money. Technology and media are kind of priorities in our lives. We’d rather have new machines than go on vacation (and so, we don’t really go on many vacations).

My goal with the Momentum Optimization Project wasn’t to make the kids not play on the computer, or not watch TV. It was to remind them that there are other ways to spend their time, too.

I know that as a child in the 1970s and early 80s, I watched as much TV as I possibly could. But in reality, there was just not that much TV to watch. Five channels, with maybe three hours of programming per day that might be interesting to a child of any given age, all running at the same time. No DVRs or TV on demand, no streaming media, no 24-hour Nickelodeon or MTV yet. I could watch All The TV There Was To Watch, and eventually, run out of TV to watch. I’d get bored, find something else to do.

Today’s kids have no such limits forced on them. There is so much entertainment, available the touch of a button, that can be delivered right to their faces. And, despite the existence of some really terrible stuff (I’m looking at you, Real Housewives), much of what’s out there is ABSOFREAKINGLUTELY AWESOME. I’m quite certain that if I had Internet when I was a child, I’d have spent my entire adolescence sitting in my room watching SNL clips and searching some kind of irrefutable evidence to prove, once and for all, that REM was better than U2. (Because they were). And if I were a kid in the 2000s, I’d probably have grown pasty looking for LOST spoilers and theories or watching Epic Rap Battles of History until I, like my kids, knew every word to every single rap battle. I get that Everything is Awesome, but I would by happy if my kids would be motivated to, say, follow up on Stephen King vs. Edgar Allen Poe by perhaps reading Carrie or at least looking up Poe’s biography on Wikipedia.

So, really, I’m not looking to put an end to computers (or comics) or to even put strict limits on either of them. I’m just trying to raise well rounded, media omnivores. As I’ve stated before, Newton’s Laws of My Family state that if they get involved in a video game early in the day, that’s pretty much what they’ll want to do all day. If I don’t point them toward other things, and give them a little shove, I know they’ll waste their free time away in a Minecraft or Steam bubble at the expense of all the other awesome stuff–music, sports, books, podcasts, movies–not to mention sunshine and face-t0-face socializing–that they could be enjoying, exploring, and learning from.

Anyway, when I started instituting “creative time” last winter, I generated this little Wordle and hung it in the kitchen. It’s just a hodgepodge of ideas so I always have an answer to “I can’t think of anything to do.” 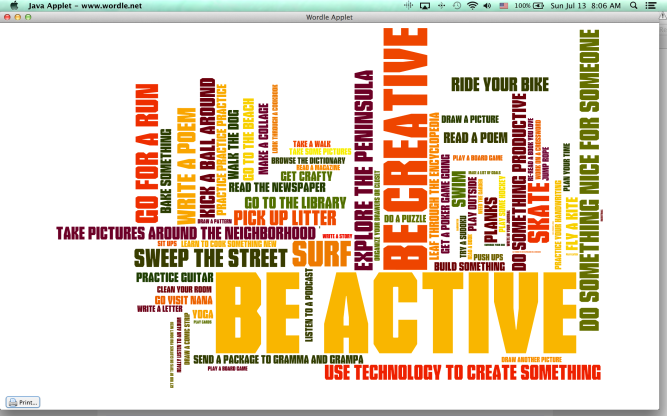 There’s exercise, chores, good deeds, and even some ideas for using technology creatively. When it’s cold or rainy, or when they’re in the height of swimming season and don’t really need to be pressed for more exercise, I’ll let them slide on the “glowing screen” aspect, and suggest they do something active or creative–say, research some topic of interest or make a video or go on a photo treasure hunt–which might involve a computer or tablet. For me, the key is to make them use technology actively and creatively, rather just having them passively absorb content while sitting in a chair.

12 thoughts on “The media ominivore’s dilemma”